J.S.O.L. stands for Janesville Schools Outdoor Laboratory and is a 151-acre arboretum owned by the City of Janesville and maintained by the city parks department and the School District of Janesville. It is used to support education by giving students a space to study local wildlife habitats, plants, and insects. It offers a space for them to experience hiking and other outdoor nature related activities.

The arboretum is a nature preserve:
Please respect nature and allow others to enjoy its beauty.
Take Only Memories, Leave Only Footprints - Chief Seattle
Click on the link below to see where you are at, as you tour JSOL.
Special thanks to Scott Skelly for creating this for us.

This Map of Hiking Trails shows all of the hiking trails with their names and lengths.  It also includes but is not limited to sharing of locations of the parking lots, structures, informational markers, and visitor rules.

Special thanks to Jerry Bown for creating this JSOL Map of Hiking Trails.

“The objective is to teach the student to see the land, to understand what they see, and enjoy what they understand.”

Preservation of the Robert O. Cook Memorial Arboretum and Janesville Schools Outdoor Laboratory (JSOL) began in 1968 with the core purchase of 85 acres of woodlands, which includes the classroom area.  In 1979, an additional 17 acres was purchased at the south end of the Arboretum.  Eight years later, 55 acres north of Marsh Creek was purchased.  In 2006, an additional 9 acres was added to the south property boundary, however some acres were traded for the creation of a neighboring subdivision.

Over the years this facility has nearly doubled in land size.  It was the vision of Robert Cook as the first JSOL Director to provide the schools and citizens of Janesville with an outdoor classroom and arboretum.  The property is maintained as much as possible in its natural state, for the enhancement of learning and the well-being for all who visit.  Today you can experience over 7 miles of nature trails in addition to a mature northern forest, wetlands, marsh, prairie and woodland edge communities.

Management and operation of this property is a cooperative effort between the City of Janesville and the School District of Janesville.  This facility is open on a year-round basis to the public.

So that everyone is rewarded with the same experience, we ask that you take the beauty of this area home in your mind rather than in our hand.

“When we see the land as a community to which we all belong, we may begin to treat it with love and respect.”

Mr. James Hornby was born March 17, 1830 in London, Ontario, Canada.  His parents, George and Mary Hornby emigrated to Canada from England.  Sometime in the 1820's the Hornby family moved from Canada to the United States, eventually settling in St. Joseph, Michigan in 1841.

James moved to Vernon County in Wisconsin (July of 1854) and bought a farm in Franklin Township.  The farm consisted of 120 acres near the town of Liberty Pole, Wisconsin*.  As was the case in those days, once he constructed his one room cabin and began to work the land, the area became known as 'Hornby Hollow!'  The cabin, which measured 16'x22' was drafty and boasted a packed dirt floor which was also customary in those days.

James had four brothers and three sisters.  Three of the brothers served in the Civil War and two died during campaigns.

For most of the cabin’s early life, it was owned by members of the Hornby family.  However, it was sold to another owner identified only by the last name of Haukabout.  After a few short years, Mr. Haukabout sold the cabin back to the Hornby family.  Over the years, other buildings were constructed including a barn that housed the growing number of animals needed by farm families.

About a hundred years after it was originally built (1954), the cabin was purchased by Norris and Mary Stokke.  As the years passed, the family grew and four children were born.  Their names were Leslie, Larry, JoAnn and Joyce.  The names and birthdates of the entire Stokke family were carefully printed on a wooden board which was uncovered over thirty years later.  Even the dog's names were listed.  In days of old, these birth records and family history were archives for the future.

The last inhabitant of the Hornby cabin was an Amish family.  Joe and Lydia Slabaugh moved into the cabin with their eleven (11) children: Gideon, Katie, Jacob, Amos, Rebecca, Lena, Susie, Andy, Joe Jr., Henry and baby Eddie.  Realizing that the cabin was far too small for his family, Joe built a larger home.  However, he must have recognized the value in preserving the historic cabin.  He dismantled the cabin log by log and tagged each log so that it might be reconstructed later.

The rest is history.  The Janesville connection was developed and the cabin exists at JSOL for the community to enjoy for posterity.

**Visitors should note that just in front of the cabin door is a large rock.  This rock served as a cornerstone on the original cabin site.  It seems that one corner of the cabin required shoring, so the large stone was used to prop the corner of the cabin.  It also made the journey to Janesville, Wisconsin.

The Hornby Log Cabin was discovered in the classified section of the Milwaukee Journal newspaper by Craig High School counselor, Tom Skinner.  The sale notice indicated that the 1850’s cabin was currently inhabited by an Amish family.  After several visits, considerable conversation and negotiation, the School District of Janesville was able to purchase the cabin.  Many individuals within the school district, and private citizens of Janesville, played key roles in the acquisition, transportation and reconstruction of the Hornby Cabin on this site.

After the sale to the Janesville group, the Hornby cabin was dismantled log by log and labeled to assure proper reassembly.  A Janesville contingent, with the support of a flatbed truck, supplied by Rock Road Construction, drove to Liberty Pole, Wisconsin to load and deliver the cabin to the JSOL property.  Once delivered, Roger Kussmann, along with students of the advanced construction class (of the Janesville High Schools) and numerous local contributors, proceeded to assemble the cabin.

By October of 2001, the cabin had been completed.  Furthermore, through contributions of the JoLynn Beeman Foundation, a blacktop and handicap accessible path had been installed to improve access to the site and to the JSOL in general.  At the same time, funding from the Beeman Foundation was used to complete a blacktop parking area with handicap availability.

Students at Edison Middle School, under the leadership of teachers Anita Fanta and Susan Skinner, developed a resource book for Janesville elementary students to utilize in their study of the log cabin and its social and historical contributions to American progress and the pioneer experience.

Another local group, the Questors, have procured historical artifacts, including tools, books and furniture of the time, to enhance student appreciation and understanding of the period.

In 1856, a political rally was held in Bad Ax, Wisconsin.  Supporters of a presidential candidate with the name of Freeman raised a 160-foot flagpole to the delight of the community.  It was made of three (3) straight tree trunks spliced together.  The flag flying in the breeze could be seen for miles.  Because of the attention and interest drawn by the flagpole, the village changed its name from Bad Ax to LIBERTY POLE! 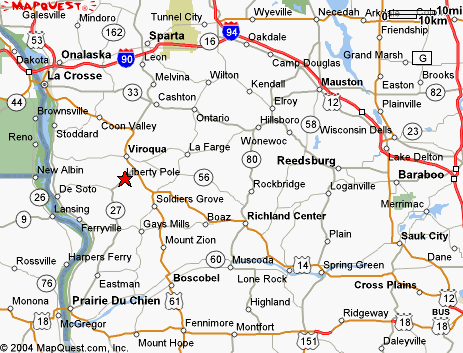 Pioneer Life was extremely demanding.  The pioneer had to be self-sufficient.  Cows produced milk.  Often, the milk was hand churned into butter.  Families planted the necessary vegetable in a garden plot.  Wild blackberries, raspberries, and other edible plants were important to the pioneer family diet.  Chickens produced eggs and more chicks.  The pioneer family was dependent on the land and the weather.

The pioneer mother was a remarkable and resourceful worker.  She was a field worker when necessary, a cook, a baker, a candlestick maker, teacher, clothing maker, child care provider and a vital partner in any and all tasks that were required for family survival.

The pioneer man was responsible for cutting the trees, hewing the logs and constructing the buildings, clearing and tilling the fields, hunting and fishing for food and safe-guarding the family.

When we consider the quality of the tools and the challenging conditions, pioneer life was both dangerous and demanding.  The workday often went from sunrise to sunset.  Most farm families were often large; in part to provide a work force to complete the many daily tasks required.  From little on, farm (pioneer) children had jobs assigned according to their size and abilities.  Imagine the patience required with so many people forced to live in a one-room cabin.  Also, picture the outhouse.  Some distance from the cabin would be the toilet facilities.  Also, keep in mind that there was no electricity, no radio, no television, no stove, no refrigerator, no oven, no video games and the nearest neighbor might be mile away.  Due to the conditions of the time, the family worked together, played together and prayed together.

Social Life of the pioneer or farm family was limited.  Sometimes work (the harvest season) brought families together to collectively share the labor of collecting the crops.  They would work together and move from one site to another until the harvest was complete.  Occasionally, pioneers would find reason gather at barn dances to enjoy the company of others.  Also, for many families, going to town was a major social activity.  The entire family would take the trip to town, which might be a serious trip of considerable time.  On this trip, the children would play with other children, the men would gather at the local saloon or tavern to discuss politics, the weather and any other pertinent news, and the ladies would have an opportunity to visit a store to view the latest fashions and social news.  As years passed and the population increased, town meetings and 4-H activities became social outlets.  Finally, as churches followed the stretch of civilization, services and related social activities became a focal point.

Pioneer health was of critical importance.  The work was dangerous and the worker isolated.  Many accidents took life and limb.  Few doctors were available.  Some doctors traveled a circuit, while others set up offices in towns.  However, not every town had a doctor.  Pioneers took care of themselves.  They passed home remedies from generation to generation.  Childbirth took place at home.  Infant mortality (death) was extremely high.  Records show that many people died young during the early years of the United States.  Vaccinations, preventive health care, even dentistry, were unheard of at that time.

The pioneer life was a daily struggle for survival!

This page shows examples of the leaves of commonly found trees at JSOL.

This is a page of common wild flowers that are found in JSOL.

This guidebook gives you the Latin Name, Common Name, Type, Photo, and a QR code to access more information about prairie plants located within JSOL. Click on the picture above to open the guidebook.

https://www.facebook.com/JSOLSDJ/
If you would like further information about JSOL or have questions/concerns please feel to email